Today I submitted a proposal to present about Evernote at a special education conference. As I was typing up my proposal I reflected back on how I used Evernote this year and started to realize how it really has become my second brain. This was my first year really embracing using Evernote in my classroom. I dabbled in using it last year but never fully jumped in head first. Being an avid Evernote user in my day to day life I really wanted to focus on integrating it into my classroom. Below are some of the ways I used Evernote this year. 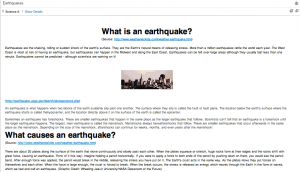 An example of our “chapter”on earthquakes.

My science textbooks are old and in bad shape. Many of them are damaged and students don’t like reading them. I used Evernote this year to aggregate information and create my own textbook chapters, aka notes in Evernote. I would make “chapters” of our textbook based on the standards and topics that we were covering. One of the biggest perks of using Evernote to create a textbook was the ability incorporate multiple forms of media. The students loved being able to look at pictures and videos in addition to reading the text. They all commented that this helped them understand the concepts we were studying. Check out our chapter on Earthquakes!

From time to time I came across videos that I wanted my students to view. Of course many of the hosting sites were blocked by our content filter. Using Evernote I was able to download the video and then upload it to Evernote. By doing this my students did not have to access a site like Youtube to watch the video. This was also great for allowing students to view the videos at home.

Using Evernote has helped me drastically reduce the number of copies that I have to make each week. At one point I was only making copies of my homework. Any worksheet, reading, or other form of printed material was stored in my Evernote Notebook. It’s gotten to the point now that another teacher commented when I was making copies last week that she thought I didn’t use paper in my classroom. I still use paper but using Evernote has helped me cut down on my paper consumption.

I tried this year to make it a point to always give credit to my sources when I clipped or saved anything to Evernote. I wanted to model for my students what a good digital citizen would do. Yes it was a pain sometimes to remember to give my source but it was important. How can I as a teacher require that students cite sources if I actively steal material and don’t quote sources?

Even though I have used Evernote a lot this year I’m excited for next year since I just found out I’ll be teaching ELA and Social Studies. It’s been fun finding ways to use Evernote in math and science but I think there are a ton of ways to incorporate Evernote into ELA.

Teach Like a Pirate: Increase Student Engagement, Boost Your Creativity, and Transform Your Life as an Educator
by Dave Burgess